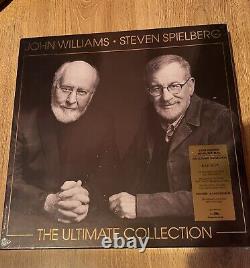 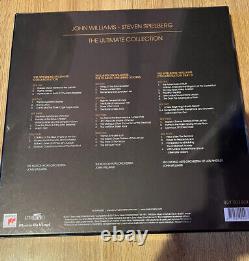 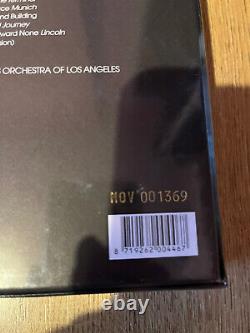 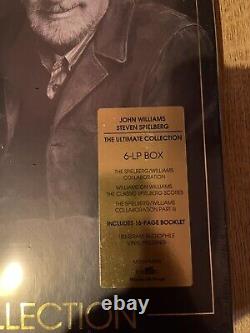 Steven spielberg and john williams. Brand new sealed and mint conditon. 180 gram audiophile black vinyl / 3 Gatefold sleeves / INCLUDES 16 PAGE BOOKLET WITH PICTURES AND LINER NOTES / BOX CONTAINS'THE SPIELBERG/ WILLIAMS COLLABORATION','WILLIAMS ON WILLIAMS' &'THE SPIELBERG/WILLIAMS COLLABORATION PART III' / MUSIC COMPOSED BY MULTIPLE AWARD WINNER JOHN WILLIAMS / DELUXE LIFT OFF BOX-SET WITH GOLD FOIL FINISH / REMASTERED FOR VINYL / FIRST TIME ON VINYL. Over the 90-year history of sound film, there have been a handful of instances where a director and a composer have formed a longtime partnership that resulted in a series of classical scores, creating music that stands the test of time. None, however, have been as long or as fruitful as the 43-year collaboration of Steven Spielberg and John Williams.

None have encompassed such a wide range of subject matter or, more significantly, have had such an enormous impact on worldwide popular culture. From the ominous shark signature of Jaws to the five-note alien greeting of Close Encounters of the Third Kind; from the heroic march of Raiders of the Lost Ark to the moving themes for Schindler's List. The music Williams has written for more than two dozen Spielberg projects has not only served them brilliantly but entered the wider public consciousness.

With a record fifty Academy Award nominations (more than any other composer) Williams has demonstrated, again and again, his ability to connect with audiences, both in the movie theatre and in the concert hall. Seventeen of those nominations, and three of Williams' five Oscar wins Jaws, E. And Schindler's List have been for Spielberg films.

The sheer variety of music, the depth of compositional skill on display, the powerful emotions that it evokes, makes John Williams & Steven Spielberg: The Ultimate Collection an extraordinary accomplishment. Both'The Spielberg-Williams Collaboration' and'Williams On Williams' were released on CD in the early 1990s. Earlier this year'The Spielberg/Williams Collaboration Part III' was released on CD and digital platforms. This latest collaboration includes new recordings of selections from most of the Maestro's scores for the director since 1997. All three albums are now pressed on vinyl for the first time, as part of this special super deluxe box-set.

Williams and Spielberg fans have been waiting a long time for this exclusive vinyl box for and now it's finally here. All audio has been exclusively mastered in the cutting room for the ultimate listening experience.

This 6LP deluxe box-set has a gold foil finishing and contains an exclusive 16-page booklet with photos and liner notes. All 3 gatefold jackets are pressed on thick cardboard with matt finish and the 180 gram audiophile records are housed in anti-static polybags. 12 secret inscriptions are written in the run-out grooves of all sides. This is truly the best work of one of America's greatest composers, inspired by the work of one of America's greatest filmmakers.. ALSO AVAILABLE ON 180 gm VINYL: OST - Lincoln / OST - Seven Years In Tibet / OST - Memoirs of a Geisha / Yo-Yo Ma - Plays The Music of John Williams.